Home > Spanish as a Global Language > The Origins of Spanish 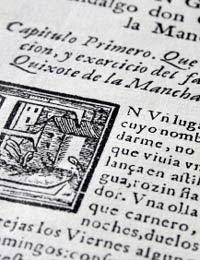 Spanish is a centuries-old language which drew on many influences before some of its first native speakers spread it across the New World, so it has a long and interesting linguistic history. In common with other Romance languages, its earliest roots are in Latin.

Spanish is derived from a dialect of spoken Latin which developed in the north-central part of the Iberian Peninsula, known as Vulgar or Late Latin, and refers to the popular dialects which diverged from each other in the early Middle Ages, evolving into the Romance languages by the ninth century. It followed the basic models of Latin, but borrowed and added words from the other languages.

Spanish also has major influences from Arabic on its vocabulary from the Andalusian period, 711 to 1492, when North Africans of Arab descent ruled Spanish intermittently. This influence survives today in words which begin with the Arab prefix al – for example in the word for carpet, alfombra. Modern Spanish has an estimated 4,000 words with Arabic roots.

There are also minor surviving influences on Spanish from Basque and the now extinct Indo-European language of the Celtic branch, Celtiberian. This came about when the region's first inhabitants, the Iberians, began to mingle with the Celts, a nomadic people from central Europe. The two groups formed a people called the Celtiberians. There are also some Germanic influences from the East German tribe, the Visigoths.

Under Roman rule, in 19 BC, the region became known as Hispania, and its inhabitants learned Latin from Roman traders, settlers, administrators, and soldiers.

Even after the Visigoths, Germanic tribes of Eastern Europe, invaded Hispania in the AD 400s, Latin remained the language of government and culture until about AD 719, when Arabic-speaking Islamic groups from North Africa called Moors conquered the region. Arabic and a related dialect, Mozarabic, were widely spoken in Islamic Spain, except for a few remote northern Christian kingdoms such as Asturias, where Vulgar Latin survived.

In particular, Castilian, a dialect that originated on the Northern Central plains, was carried into southern and eastern regions. The resulting language was a hybrid because Castilian borrowed many words from Mozarabic, and modern Spanish has an estimated 4,000 words with Arabic roots.

The creation of a standardised Spanish language based on the Castilian dialect began in the 1200s with King Alfonso X, known as the Learned–King of Castile and Leon. He and his court of scholars adopted the city of Toledo as their headquarters. There, scholars wrote original works in Castilian and translated histories, chronicles, and scientific, legal, and literary works from other languages (principally Latin, Greek, and Arabic). Alfonso X also adopted Castilian for administrative work and all official documents and decrees.

The Castilian dialect of Spanish became more widely accepted during the reign of the Catholic monarchs Isabella of Castile and Ferdinand of Aragón, who completed the reconquest of Spain in 1492. Isabella and Ferdinand made Castilian the official dialect in their kingdom.

In the same year the Moors were defeated, an important book appeared: Antonio de Nebrija's Arte de la Lengua Castellana (The Art of the Castilian Language) – the first to study and attempt to define the grammar of a European language. The Castilian dialect became the written and educational standard in Spain, although several spoken dialects lingered. The most noteworthy was Andalusian, a dialect spoken in the southern city of Seville in the Andalucía region.

From the 16th century onwards, the language was taken to the Americas and the Spanish East Indies thanks to Spanish colonialism.

In the 20th century, the Spanish introduced their language to Equatorial Guinea and the Western Sahara, and areas of the United States that had not been part of the Spanish Empire, such as Spanish Harlem in New York City.