The Conditional Tense in Spanish 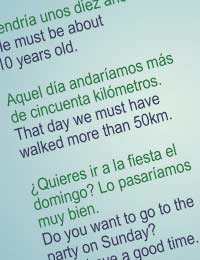 Roughly speaking, the conditional tense translates as ‘would’, ‘should’ or ‘could’ in English, although not necessarily with the same sense of obligation. Most frequently, it expresses the idea that a event depends on some other factor – for example, ‘we could go tomorrow if the weather’s nice’, ‘I would do it if I had time’, and so on. It indicates outcome rather than the condition itself.

As with the future tense, the conditional may not be the most common expression in Spanish, but it’s well worth gaining a firm understanding nonetheless. You will come across it, and need to be able to recognise it.

Formation of the Conditional

For an –ar verb like comprar (remember, this is the verb to buy)

Uses of the Conditional

One important use, which English speakers tend to often forget, is to describe suppositions or approximations in the past. So: -

He must be about 10 years old.

That day we must have walked more than 50km.

This tense is also used in implied conditions. So:

Do you want to go to the party on Sunday? We’d have a good time.

It would be crazy to go outside in New York in January without a good coat on.

The conditional can also state what would happen in certain conditions, often in conjunction with si, meaning ‘if.’

If I won the lottery, I’d buy myself a huge house.

(Note that, in this sentence, ‘ganara’ is a subjunctive verb – we will be looking at this elsewhere on the site.)

In some styles, especially in journalism and particularly in Latin America, the conditional is used for rumours or unsubstantiated reports. Some rigid grammarians roundly condemn this practice.

Gregorius was apparently born in Glasgow.

According to our special correspondent, security reasons are said to be the motive for the disappearance of the ETA members.

(ETA is the separatist organisation demanding independence of the Basque Country.)

The conditional is also used to express the future when talking in the past, making it a close equivalent of the ‘was going to + infinitive’ construction. Again, this is popular in Spanish journalism:

Replacement with the Imperfect

Finally, you should be aware that sometimes the past imperfect tense (again, this is explained in more detail elsewhere on the site) is used in place of the conditional. This is particularly true of colloquial language.