Home > Spanish Grammar > The Past Imperfect Tense in Spanish 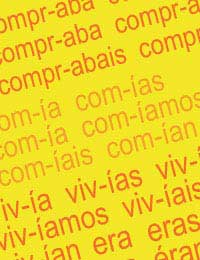 The past imperfect tense in Spanish is used to refer to an action in the past, of which the beginning or end is of no relevance to the context. In that sense, the action is incomplete, or ‘imperfect.’ It indicates that an event was in the process of happening in the past.

Formation of the Imperfect

To form the imperfect, take the infinitive of the verb and then remove the final two letters. In practice, this means –ar, -er, or –ir.

Then add the endings as follows. (Of course, the hypen is just to show you the stem and the endings: you wouldn’t normally write the words in the this way.)

Note that with the verb ‘ver’ (to see), the infinitive is so short that it only loses the ‘r’ from the infinitive, but keeps the ‘e’ in its stem. So you say ‘veía’ and so on.

Uses of the Imperfect

It is used to describe what was going on at the time it was being referred to.

In the capital (city), they were still rebuilding the districts destroyed in the earthquake.

Also use this tense to give a descriptive background in the past.

There were a lot of people around the cathedral, and although it was hot, and the sun was shining, a cloud of smoke hunger over the city.

The imperfect tense is also a way of showing courtesy in requests and enquiries.

The imperfect tense is often used to describe repeated or habitual actions in the past, often conveying the idea of used to. When being used in this way, it is often accompanied by adverbs or expressions of time which indicate repetition, such as ‘a menudo’ (often) or ‘a veces’ (sometimes.)

When I lived (used to live) in the UK, I often went (used to go) to Chile.

This is what is called a modal verb and is often used in the imperfect to describe what you used to do.

When I lived in the UK, I used to go to Chile every year.

Contrasted with the Preterite

Note that in English, our simple past tense (lived) does not distinguish between completed single actions and repeated actions or description. Not so in Spanish, where completed actions in the past take the preterite tense. (Explained elsewhere on this site.)

Note also the difference between a progressive background action in the imperfect, and single instances of events in the past, for which you use the preterite.

The Imperfect Instead of the Conditional

If I had the chance to go to Chile, of course I’d take it!