Por and para in Spanish 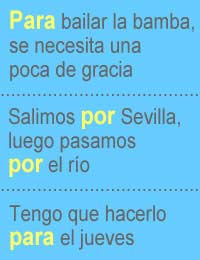 Por and para are two prepositions which some learners of Spanish can find confusing at first. Essentially, this confusion comes from the fact that both can translate as ‘for’ in English – but in different contexts.

Don’t worry if you are struggling initially to know when to use which – you are not alone! In fact, some might say that it’s right up there with the subjunctive and ser and estar as one of the hardest things to learn in Spanish. But don’t be put off. The good news is that, by following a few simple rules, you should be able to get your head round the differences quite quickly. ¡Suerte! (Good luck.)

The best way to distinguish between the two is to see para as indicating purpose – para qué means What for? For what purpose?, while por is more about indicating cause.

Think of this word as meaning ‘for’ in the sense of destined for, intended for or considering.

Take this sentence as an example:

In Córdoba, we bought flowers for Aunty Mary. For a man, I didn’t chose badly!

Para also means ‘for’ in the sense of by a certain time. For example:

I have got to do it for Thursday.

Also, use para with the infinitive of the verb as a little construction which means ‘in order to’. Remember the famous line of the song, La Bamba;

To dance ‘la bamba’, you need a little bit of grace/charm.

This word can be translated as ‘by’ as part of what is known as a passive verb construction. For example:

These flowers are grown by a local firm.

Por can also mean for in the sense of through, because of or as a result of.

The firm is famous for its flower, but we didn’t visit it because of the need to continue with our journey.

Por can also mean ‘in exchange for’:

Ten euros for those flowers? Can’t I pay less for them?

It can also mean through, via or along:

We set out through Seville, then went along the river.

You will also see por used to mean ‘for’ in the sense of ‘on behalf of.’ So that:

I bought flowers for my mother – in the sense of ‘on behalf’, so that she could then pass on to someone else, rather than for her directly. (This is where learners can initially get confused!)

Por is also used to say ‘for’ when describing a completed period of time, usually in the past:

We stayed there half an hour.

Por is also used when talking about motion in the sense of ‘all around’ or ‘all over’:

We walked around the city. Then we went up the ramp to the top of the cathedral. From there, we could see all the city below us.

Finally, note the use of por in the following common expressions, known as adverbial phrases.

Por la mañana In the morning

Por la tarde In the afternoon/evening (remember Spanish doesn’t differentiate between the two.)

Por telélefono By or on the phone

After some time learning Spanish, you will find that you develop an instinct for knowing which one to use, without having to think about it too much.