Personal a in Spanish 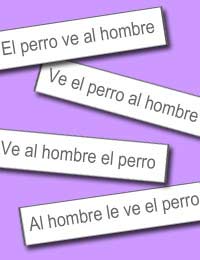 There is no literal meaning, it is just an indicator to avoid confusion. In many ways, it's a marking out of human direct objects and giving them a special distinction. (Other languages do this as well.) In particular, the personal 'a' is never omitted before a direct object which is a personal name or title - Uncle Pepe, Professor Gomez.

These are examples of how the personal a would be used:

The same principle applies with these two words:

Note that, to make the meaning absolutely clear, the personal 'a' is sometimes also used even if the direct object is an animal.

So: Atacó el perro el gato is ambiguous - it could mean the dog attacked the cat, or vice versa.

But: Atacó el perro al gato ( a and el having contracted in this sentence to form al) Thanks to the personal a, this sentence can only mean that the dog attacked the cat.

Additionally, this construction is sometimes used in front of animals, towns and countries to personalise them. In many cases, with animals it depends on the extent to which you want to humanise the creature.

Have a look at the following:

Gustar and 'Back to Front' Verbs

There are a number of Spanish verbs which work 'back to front' to their English equivalents. The subject in English becomes the direct object in Spanish. So that 'My son likes computers', which sounds perfectly natural to the English ear, becomes 'Computers please my son' (literal translation of the Spanish). In such cases, the personal a is often used for emphasis.

Other similar verbs include:

Have a look at these two sentences, and see the difference the personal 'a' makes: