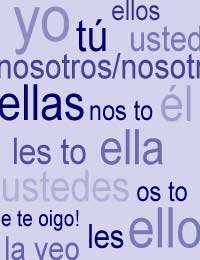 There are various kinds of personal pronouns in Spanish. This guide takes you through the different kinds - and shows you how to use them.

In Spanish, pronouns agree in gender (i.e. masculine or feminine) and number (i.e. singular or plural) with the noun they are referring to.

They are different depending on whether they are the subject, direct object, indirect object, or are used independently of a verb.

ellos They – masculine or mixed

Since the subject, or the doer of the action, is contained in the verb ending in Spanish, these subject pronouns are only used to avoid confusion, and when they stand alone. In fact, it is quite common for beginner learners to include them wrongly when they are not needed. Arguably, usted and usetedes are used more often than the others, .largely due to the possible ambiguity over the shared third person verb endings, also used for he, she and they. Equally, sometimes usted is used as a way of stressing deference to the person or people being addressed.

See elsewhere on this site where we have explained the polite and familiar forms of address in more detail.

This is known as the neuter subject pronoun, and refers to an idea so it means this, that, the fact. However, do be aware that its use tends to be quite literary, and so esto tends to be preferred in speech.

Remember, a direct object receives the action of a verb, or shows the result of the action.

Here they are in Spanish:

lo it (for masculine things)

la it (for feminine things)

las them (feminine people and things)

Note that both le and lo are used for the masculine direct object ‘him’. Lo tends to be favoured in Latin America and southern Spain.

Try and work out what they mean – answers below.

In the sentence, We gave John a present, John would be the indirect object. Although the indirect object usually means to or for someone, this is not always clear in English, and you should always take care to use the right object pronoun in Spanish. Here they are:

les to/for them; to/for you (formal)

Note that, where there is both an indirect and a direct object pronoun, the indirect always goes before the direct.

Also, when the indirect and the direct object are both third person, and so would both begin with ‘l’, the indirect one invariably changes to ‘se’.

All object pronouns go before the verb – except for positive commands – such as ¡Hazlo! (Do it!) the infinitive, hacerlo, to do it, and the gerund – haciéndolo, doing it, in which case they are attached to the end of the verb.

These are personal pronouns which refer back to the subjective of the sentence in reflexive verbs – i.e. those where you do something to yourself.

In the first person (me, me, nos, us) and the second person (te, os), Spanish sticks to normal personal object pronouns for the reflexives. However, there is a special third person reflexive which is singular as well as plural – se. This means himself/herself/themselves and also yourself and yourselves for usted and ustedes.

Of course I can see you !

Where is Carmen? I can’t see her.

The neighbours phoned. You didn’t tell me that you had phoned them. They wanted to tell us that they want you to lend them your battery charger.

I had a shower before going (before I went) out.

He/she bought him/her self a bottle of wine.