The Present Tense in Spanish 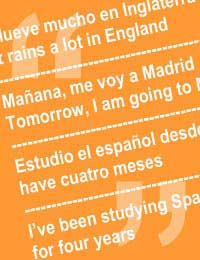 Bear in mind that ‘present tense’ can be a misleading name, since, in Spanish, it can be used to describe timeless and future events.

When to Use the Present Tense

Firstly, it is used to describe what the situation is now:

At the moment, my mother is speaking on the phone.

Secondly, you can use the present tense to discuss what happens sometimes or usually:

Many Americans only speak Spanish at home.

It rains a lot in England.

You would also use this tense for something which is definitely going to happen quite soon, especially for pre-arranged events, as happens in English:

Mañana, me voy a Madrid.

Tomorrow, I am going to Madrid.

Equally, it describes what has been happening up to now, and may continue to happen.

We have been here for half an hour.

It also describes a perpeptual state – things that are always true.

I am from Argentina.

Finally, in colloquial speech, the present tense is often used with a questioning intonation to soften a command into a request. English has a similar device.

Will you bring me the bill, please?

Can you tell me the time, please?

By the term ‘present indicative’, we mean the ‘ordinary’ tenses, as opposed to the subjunctive forms, which will be described elsewhere on this site. (Don’t worry too much about that at this stage.)

Formation of the Present Indicative

There are three main types of Spanish regular verbs - those whose infinitive forms end in –ar, -ir, or –er.

To make create the present tense, take the infinitive form, and remove the –er, -ar or –ir endings, so you are left with what is known as the stem of the verb.

For an –ar verb like comprar, to buy, add the following endings to the stem, which in this case is compr-

Él, Ella or Usted (He, She, You, singular, polite) Compra

Vosotros (You, plural, familiar, only really used in Spain) Compráis

Él, Ella or Usted (He, She, You, singular, polite) Come

Vosotros (You, plural, familiar, only really used in Spain) Coméis

Él, Ella or Usted (He, She, You, singular, polite) Vive

Vosotros (You, plural, familiar, only really used in Spain) Vivís

In English, this is expressed as ‘I’m talking’, ‘I’m writing’ and so on. In Spanish, though, it can only refer to an action which is actually in progress at the time of the sentence. So that if you were calling out ‘I’m falling’ for example, it would only make sense if you were actually mid-air.

To compose the present continuous tense, use the appropriate form of the present indicative of the verb estar:

Then add it to what is known as the gerund. This translates in English as the ‘ing’ form.

For –ar verbs, add ‘ando’ to the stem of the verb, so for hablar the gerund is hablando.

For –er and –ir verbs, add ‘iendo’ to the stem of the verb, so for comer the gerund is comiendo.