Home > Spanish Grammar > How to Learn Future Tense in Spanish 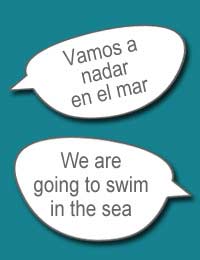 Spanish is a very fluid language, and has more than one way of expressing the future. In fact, sometimes the present and future tenses can seem almost interchangeable.

Essentially, there are two main ways of expressing the future in Spanish, known as the ‘future immediate’ and the ‘future simple.’

This describes an action which is about to happen. It is the same in English as saying you are ‘going to do’ something. You form it by using the appropriate form of ir, the irregular verb ‘to go’, followed by ‘a’, followed by the infinitive of the verb you want to use. There is a very similar structure in English. So:

We are going to swim in the sea.

The boss is going to come back to the office next week.

Here is the present tense of the verb ir, which you will need to make this construction:

This may not be the only, or even necessarily the most common, way of expressing the future, but it’s worth making the effort to get your head around this tense anyway.

The future simple is formed by adding the right endings to the stem – which in this case of this tense is the whole of the infinitive. While the endings are the same for all verbs, sometimes the stem, which always ends in ‘r’, is irregular. These are given below.

Note the stress accent, which falls on all the endings apart from the ending ‘emos’.

The endings are as follows:

For a verb like comprar, to buy, which ends in –ar:

For a verb like comer, to eat, which ends in –er:

For a verb like vivir, to live, which ends in –ir:

Note that the following verbs all have irregular stems for making the future. No special magic, unfortunately, they just have to be learned. Setting aside a few minutes a day to learn one or two verbs will soon help a learner increase their knowledge.

The first person (Yo/I) is detailed below. Remember that the endings remain unchanged:

Tip for Using the Future Simple

The stem of many Spanish verbs stays the same regardless of the tense that is used. It is important, therefore, to use the verb ending to indicate the tense. One tip for learners of Spanish when they use the future simple tense is to really emphasize the accented syllable. As a learner becomes more fluent then this this will come second nature, however for a beginner it may seem a little strange. It is this emphasis on the final syllable, however, that helps to make the tense that is used clear.
Next Page