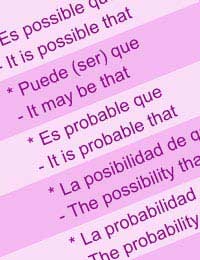 The subjunctive is best described as a mood – it means using a completely different verb form so it is not just another tense. Its importance in Spanish cannot be over-emphasised. It doesn’t seem to be disappearing from everyday use, so it is worth getting to know the subjunctive well. As you explore it in greater detail, you will gain a feel for when to use it.

Essentially, it reflects uncertainty, doubt, vagueness, negativity and so on. Although it is mainly used in subordinate clauses, often starting with ‘que’, it can also occur in main clauses, and in some forms of the imperative.

The opposite of subjunctive is indicative, which is the ‘mood’ you will use most of the time.

Use of the Subjunctive

The subjunctive mood is used in some very common imperative or command forms which you hear all the time.

Subjunctive after Expressions of Influence

Use the subjunctive after verbs or noun phrases in which the subject of the main clause gets someone or something else to perform an action. Expressions of wanting, liking, ordering, forbidding, advising, insisting and so on come into this category.

Pedir (to ask, request) and decir (to tell someone to do something) must always be used with the subjunctive.

Have a look at the following sentences. The subjunctive verbs are in capitals.

My wife is always telling me to travel by train.

Ella no quiere que yo VAYA.

She doesn’t want me to go.

It’s a shame that I have to travel to Seville without my wife.

It is natural that she should be worried about me.

I am glad she is considering inviting her sister.

Subjunctive after Expressions of Doubt, Denial and Disbelief

These are as opposed to positive statements of certainty – which take the indicative.

I doubt whether the company will change its policy.

I don’t think there are going to be strikes over this matter.

Subjunctive after Expressions of Possibility and Probability

Always use the subjunctive after the following:

The subjunctive is used in subordinate clauses where the action was not a reality at the time of the action of the main verb.

A classic example is expressions such as ‘when’, ‘as soon as’ and so on. Look at these :

When I arrive in Seville, I will call my wife.

When I arrived in Seville, I called my wife.

Here are some expressions which take the subjunctive when they refer to events that have not happened.

Tan pronto como as soon as

Phrases, which contain the basic idea ‘in order that something shall happen’ need the subjunctive, since this action has not yet happened. These include ‘para que’ and ‘a fin de que’, which both mean ‘in order that’ or ‘so that’.

Use the subjunctive after the following phrases when they refer to something hypothetical rather than a fact:

Aunque (although, which, with the subjunctive tends to be the English equivalent of ‘even though’)

a pesar de que (in spite of the fact that)

The subjunctive is always used after:

a condición de que on condition that

a menos que unless

Other conjunctions taking the subjunctive include ‘sin que’ (without) and ‘en el caso de que’ (in the event that).

This expresses a strong wish, and takes the subjunctive.

If only the boss would retire!

The Subjunctive in Common Phrases!

The following set phrases contain the verb in the subjunctive:

Que yo sepa – as far as I know

Sea como sea – be that as it may

O sea - in other words