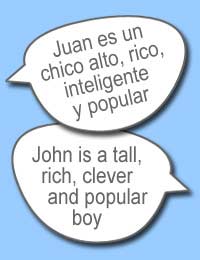 As you know, an adjective is a describing word – like, young, old, tall, fat and so on. Let’s look at two kinds which exist in Spanish – descriptive and limiting.

Descriptive adjectives let us know what kind of person, place or thing is being talked about. For example:

John is a tall, rich, clever and popular boy. (Lucky John.) Or:

Unlike English, they are usually placed after the person or thing described. They agree with their noun in number (singular or plural) and gender (masculine or feminine.)

Limiting adjectives tell us ‘how many’ of something there are. In Spanish, as in English, they generally go before the noun they describe. Here are some examples:

Like descriptive adjectives, limiting adjectives MUST be made to agree in number and gender with the noun they describe.

Anna is rich, but Peter is also rich as well.

They have a new house and two black cars.

If an adjective doesn’t end in ‘o’, then it remains unchanged in its masculine and feminine forms. Examples include popular (popular) and interesante (interesting).

To form the plural of an adjective, if the word ends in a vowel, simply add ‘s’. So alto (tall or high) becomes altos, and amable (friendly) becomes amables.

If an adjective ends in a consonant – i.e. a letter other than a, e, i, o or u, simply add –es, So azul (blue) becomes azules, and normal (normal, ordinary) becomes normales.

Unless the accent falls on the penultimate syllable, keep the accent on all singular and plural forms of adjectives. So difícil (difficult) becomes dificiles, while rápido becomes rápidos.

As you would probably expect by now, you can make these feminine by changing the final ‘o’ to ‘a’. So italiano becomes italiana, and so on.

Even for adjectives of nationality which end in a consonant, you still use ‘a’. So, for example, español (Spanish) becomes española in the feminine, and inglés (English) becomes inglesa.

Tan .. .como is used to compare adjectives and adverbs.

I want to be as famous as the president.

I want as much money as her.

Note that tanto agrees in number and gender with its noun – tantas cosas, tantos coches – as many things, as many cars. (And tanto can also mean ‘so many’, as in tanta cosas que hacer – so many things to do.)

These explain who the owner of something is:

Possessive adjectives go in front of the noun. Note that tu is distinguished from tú (you) by losing its accent, and it means your when addressing (one person) familiarly.

Vuestro is used particularly in Spain when addressing more than one person familiarly – such as your parents, or a group of young children.

When the noun which follows is plural, add ‘s’ to each possessive adjective:

The other possessive adjectives do not have separate feminine forms.

This/These – Person, place or thing close to the speaker. These agree in number and gender:

That/Those – To indicate something which is closer to the listener than the speaker. They also take number and gender agreement:

Spanish also has that/those where there is a distance between the listener and the speaker. Once again, note the number and gender agreement: