Home > Spanish Grammar > The Past Preterite Tense in Spanish

The Past Preterite Tense in Spanish 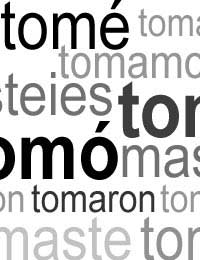 The preterite tense in Spanish normally describes events which are both in the past and completed, or at least described as beginning in the past.

Correct translation of the English means deciding which sense of the past is implied.

Formation of the Preterite

To form the imperfect, take the infinitive of the verb and then remove the final two letters. In practice, this means –ar, -er, or –ir. Then add the endings as follows, and note the stressed endings in the first and third persons singular:

For a regular –ar verb such as tomar (to take, often used in the sense of to have a drink)

For an –ir verb such as vivir (to live):

Note that these same endings also apply to regular –er verbs as well.

Some verbs take what is known as ‘pretérito grave’. The first and third preterite endings are not stressed, and have no accent. Additionally, the stem of the preterite is usually unpredictable.

A classic example is tener, to have, whose preterite goes like this:

Other commonly used verbs with a ‘pretérito grave’ , which follow this pattern, are:
Andar (to walk) anduve
Caber (to fit, eg in car) cupe
Estar (to be) estuve
Haber (to have) hube
Hacer (to do/make) hice (hizo in the third person singular)
Poder (to be able to) pude
Ponder (to put) puse
Querer (to want) quise
Saber (to know) supe
Venir (to come) vine

Note that when the stem of ‘pretérito grave’ ends in ‘j’, the third person plural ending is –eron.

This takes an irregular preterite:

Use of the Preterite

The preterite is used to indicate an event which is past and complete. The difference between the preterite and the imperfect often expresses an idea which is not easily translated into English. Compare, for example:

Tuvimos que atraversar dos desiertos para llegar al oasis - We had to cross tow deserts to get to the oasis. (And we did it.)

Teníamos que atraversar dos desiertos para llegar al oasis - We (still) had to cross tow deserts to get to the oasis. (And we did it.)

Here are a couple more examples:

Fue un error no devolverle el dinero - It was a mistake not to return the money to him.

Preterite for Finite Periods of Time

If a finite period of time in the past is mentioned, i.e. a period of time of a specific length, then you must use the preterite tense for any event which went on the for the duration of the period, and then ended. Note that a period of time is often implied rather than explicit.

Por un instante, pensé que me caía - For a moment, I thought that I was falling.

Durante meses o pudimos hablar de otra cosa - For months, we couldn’t talk about anything else.

In sentences with phrases like ‘todos los años’ (every year) or ‘todos los días’ (every day), the beginning and ending of the period of time are not specified, and so you should use the imperfect.

Special Uses of the Preterite

Some verbs undergo a change of meaning according to aspect. This is especially true of saber (to know), poder (to be able to), tener (to have) querer (to love/want), and conocer (to know a person).

The preterite of ‘poder’ is closer in meaning to ‘to manage to’ as opposed to ‘be able to.’

Pudo hacerlo - He/She/You (formal) managed to do it.

With ‘saber’, the meaning changes to ‘find out, realise.’

With conocer, the meaning becomes ‘to meet someone for the first time.’