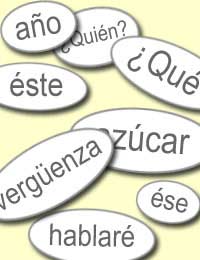 The main accent used in the Spanish language is the acute: this is how it looks, for example, over an a: á. There are no grave accents – i.e. accents which point the other way – as there are in French.

Note that it is used only to indicate stress over a vowel – it doesn’t affect how the letter actually sounds.

By stress, we mean the stronger emphasis that falls on one particular syllable of any word which has two or more syllables. (There are similar stress patterns in English.)

There are three rules about the positions of stress on any Spanish word.

The first is that if a word ends in either a vowel, or an ‘n’ or an‘s’, the next to last syllable is stressed. Take a look at these examples:

The second rule is that if a word ends in a consonant other than ‘n’ or ‘s’, the stress falls instead on the final syllable. Here are some examples:

comer (the verb to eat)

The third rule is that if a word doesn’t conform to either of these two rules, it will take an accent to show where the stress falls. So:

Some groups of words have an accent in the singular but not in the plural form – and vice versa.

So estación (station) becomes estaciones, ingles (English) becomes ingleses, rehén, the word for hostage, becomes rehenes, and so on.

The same rule applies to words ending in –en where the stress falls on the penultimate syllable.

In all interrogative or questioning words, the stress accent is used on the stressed syllable, as shown below:

An accent also falls on the pronoun forms of demonstrative adjectives, like so:

éste y ése mean ‘this one’ and ‘that one’ respectively.

An accent is also used to distinguish two words which would otherwise have identical spelling. So:

This looks like this: ü. It is like the German umlaut, and used only in these combinations of letters: -güe and –güi to show that the ‘u’ is sounded.

A good example, is the word for shame, or disgrace – la vergüenza.

The ñ in Spanish

The squiggle over some ‘n’s in Spanish is known as the tilde. It is one of the few ways the Spanish alphabet differs from the Latin one, and is unique to this language.

Historically, it came about when scribes transcribing Latin used the tilde to donate that a word had two ‘n’s, with the squiggle donating the second. This is, for example, how the Latin annus became the Spanish año (the word for year.)

The ñ is considered a letter in its own right in Spanish, and you will find it classed as such in dictionaries.

Its sound is like the ‘nye’ sound in the middle of ‘onion’.