How to Say 'You' Across the Spanish Speaking World 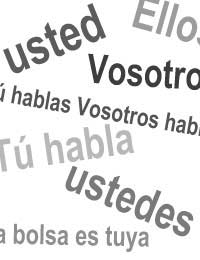 Spanish is a sensitive and expressive language. Adjectives change to reflect the gender and number of the noun they are describing, and verbs change depending on the person you are addressing and the relationship you have with that person.

There are not one but four words for ‘you’, which are not reflected in English translation – it always comes across as the same word: ‘you’. Spanish even has a verb, tutear – which means ‘to address someone as tú.’

Here are the different words for ‘you’ in Spanish: Familiar form, singular = túFamiliar form, plural = vosotros, or, for an exclusively female group, vosotras

You will sometimes see useted shortened to Vd. in writing, with Vds. in the plural.

How it Affects the Verb You Use

If we take a regular verb, hablar - to speak, and just have a look at the present tense, we can see how it changes depending on the subject. Remember, in English, this would all be translated as ‘you speak’:

Remember, this is just one example of one tense and one verb! Although it may seem overwhelming to have so many forms to remember, just to say ‘you’, and we haven’t even mentioned irregular verbs yet, it’s surprisingly how quickly it all becomes normal.

Looking at the example above, notice how the polite ‘you’ takes the same form of the verb as he/she or, for the plural, they.

Also, in the above, the pronouns have been included for clarity. But in real life, a Spaniard would normally leave out these pronouns, because the context would make clear who the subject of each sentence was.

This is the command form, as in ‘speak to me.’ Have a look at the table below, again using the same regular verb, hablar, to see how you would say ‘speak’ and ‘don’t speak’. Again, you wouldn’t normally use the pronouns in front of these words in general use. Once again, this is only an example, using one regular verb.

The tú/usted division is also reflected in how to say ‘your’ and ‘yours.’

So, Mi casa es tu casa – my house is your house. This is the familiar form, whereas if I was speaking using the ‘usted’ forms, it would be Mi casa es su casa.

Likewise, the possessive adjective ‘yours’, which agrees in gender and number with the thing which is being described.

Esta bolsa es tuya – This bag is yours. (Singular, familiar.)

Este coche es vuestro – This car is yours (Singular, plural.)

El perro es suyo - The dog is yours (singular, polite) or his or hers. (Spanish doesn’t distinguish, but meaning should be apparent from the context.)

Las casas son suyas - The houses are yours (singular, plural) or theirs. (Again, there is no distinction.)

By the way, note that to make a question, or to say Is this car yours?, just put question marks round it like this: ¿Este coche es vuestro? When speaking, just allow your voice to rise at the end, as you probably would naturally when asking something in English, and people will understand it is a question.