Home > Spanish Pronunciation > When to Use the Words 'Tu' and 'Usted'

When to Use the Words 'Tu' and 'Usted' 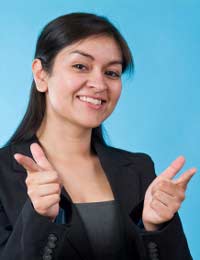 Sometimes knowing which form to use can be confusing for the learner of Spanish, especially as English only has one word for ‘you’. Usage does vary significantly across the Spanish-speaking world. But you’ll soon get the hang of it and, if you chose the wrong form, most native Spanish speakers are unlikely to take great offence, especially if they know you are a beginner learner of their language.

‘Usted’ is the polite way of saying ‘you’ in Spanish. It comes from the old respectful form of address Vuestra Merced, or ‘Your Grace.’ It’s similar to the idea of using ‘vous’ in French, or ‘Sie’ in German, although, in Spain at least, it tends to be used less frequently than its French and German equivalents. Spaniards use ‘tú’ and its associated verb forms more frequently, and earlier on in their acquaintance with somebody. In recent years, ‘usted’, while hardly redundant, has come to be used less often. It still shows a certain amount of respect for, and distance from, the person you are addressing.

Usted would be used in formal situations like court cases or job interviews and commercial settings, and for officials and people you don’t know well. It would also be the way a younger person would speak to an older person, even though the older speaker may respond with tú’.

You would certainly use ‘tú’, in mainland Spain at least, when talking to partners, immediate family, friends and other people you know well, and for addressing children and animals. It is also the form always used in religious ceremonies when addressing God in prayer, since it implies a certain intimacy.

If you generally address someone by their first name, then ‘tú’ is usually a safe bet, as it is if someone asks specifically to be addressed that way. If you're uncertain which to use, it is usually better to be guided by the native speaker. Use usted unless the person starts speaking to you starts using tú, in which case it is usually OK to reciprocate (unless you're a child or the person speaking to you is a police officer or some other figure of authority).

Unlike French, Castilian Spanish has a second person plural form, vosotros, for use when addressing a group of people using the familiar ‘you’ – a group of friends or schoolchildren, for example.

When in Latin America

However, this form does not tend to be used widely, or indeed much at all, across Latin America.

Instead, people just use ‘ustedes’ as the second person plural, even when talking to friends and close family or, say, a group of young children. You will almost never hear vosotros or its associated verb forms.

In fact, it’s true to say that in Latin America you will hear the polite form of address used much more regularly all round. In many parts of Colombia and Chile, for example, the singular ‘usted’ can be heard even for close family.

While it may seem bewildering at first that there are so many ways of saying ‘you’, it’s part of the richness of the Spanish language. You may even start to wish we had some equivalents of our own in English!