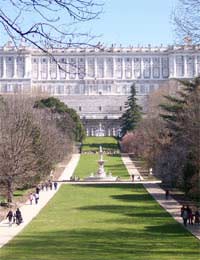 This reasoning also holds true for the language's preferred name in some Latin American countries. Speakers in Uruguay and Argentina, for example, often refer to Castellano rather than Español, which is more commonly used to describe the language as a whole in most of the rest of Latin America.

The dialect of Vulgar Latin that was common in what is now the north-central portion of Spain, which includes Castile, originally a frontier land controlled from a series of castles, spread throughout the region. In the 13th century, King Alfonso supported efforts such as the translation of historic documents that helped the dialect, by then known as Castilian, become the standard for educated use of the language. He also made that dialect the official language for government administration. As later rulers pushed the Moors out of Spain, they continued to use Castilian as the official tongue.

Although Castilian became the primary language of the area now known as Spain, its use didn't eliminate the other Latin-based languages in the region. Galician (which has similarities to Portuguese) and Catalan (one of the major languages of Europe with similarities to Spanish and French) continue to be used today, along with Basque.

It is important to remember that Spain only became a kingdom in the fifteenth century. The official unification date is disputed, but commonly agreed to have not occurred earlier than the eighteenth century. Only then did the Castilian language begin to be commonly called Spanish.

In Spain, a person's choice of terms to refer to the language — Castellano or Español, can have political implications, with the term Spanish being more politically incorrect or imperialist, although other Spanish speakers consider castellano to be merely a convenient generic term, with no political or ideological links.

A speaker is more likely to refer to Spanish when they want to describe a purer, more standardised version of the language.